PEACE with Penny: Penny S. Tee interviews two Peace activists together who are members of Women Wage Peace. Women Wage Peace was created because of the impact of Operation Protective Edge in 2014, the same war that broke open Penny S. Tee’s world and made her want to work on Peace.

Women Wage Peace is a grassroots movement of 60,000 members from throughout the political spectrum, Jews and Arabs, religious and secular, united in the demand for a mutually binding non-violent agreement between Israelis and Palestinians to end the conflict, involving women in the process (in the spirit of UN Resolution 1325). 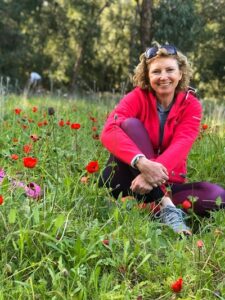 who often contributes to the Times of Israel and works for Ben-Gurion University of the Negev as a content writer and translator. Her son is currently a combat medic in the paratroopers brigade and two other of her children have also defended Israel in their military. As a mother who works on Peace, the tangle of disparate emotions she feels is challenging as her loved ones each serve, one after the other, in the Israeli military—pride, fear and an incentive to work on Peace. What greater motivation could a mother have to work on Peace than the safety of her children?

Penny S. Tee has said that speaking with Amal is like speaking to a feminist, Palestinian Gandhi. Amal has had a documentary made about her called, “Be/longing.” Amal is confident in her own identity, but struggles with the labels others put on her. She says, “For the Jews, I am Palestinian. For the Palestinians, I am Israeli. I ask myself who am I? To whom do I belong?”

Women Wage Peace has had many events through the years and Penny S. Tee says their women’s Peace marches of Israeli and Palestinian women, young and old, arms entwined winding through the Israeli desert never fails to bring tears to her eyes. If only Peace existed today, how many lives could be saved? We hope you will join us and listen to the informative, heart-felt passion, as all three women work to promote Peace.

May You Live in Peace, שלום and سلام.